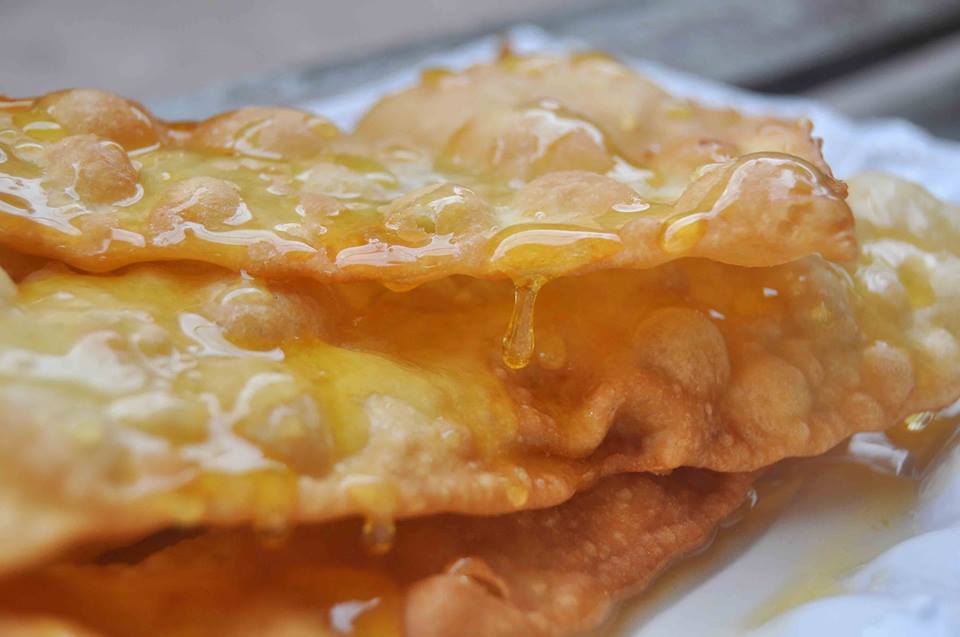 Among the typical Carnival recipes we have the Pontelandolfese variant of the “Chiacchiere”. It seems that this dessert has very ancient origins, even dating back to Roman times. Initially, they cooked cakes made from eggs and flour fried in pork fat, to be distributed in large quantities during the Sarurnali festivals, which coincided with today’s Carnival.
Widespread in the various regions of Italy, in Pontelandolfo (as in many places in Molise and Campania), they take the name of Scorpelle and are served seasoned with honey from the local hills. It was not easy to find a unique recipe because the opinions of the chefs of Pontelandolfo are conflicting. So much so that, in all likelihood, it will be possible to taste different versions of the scorpelle depending on the houses you will be able to visit. A demonstration of the fact that, although it is a very simple dessert, it lends itself to the most diverse gastronomic interpretations. Below we offer a version that seems to agree a little all, reminding you that the beauty of the kitchen is experimentation. Exactly like a melody that, although equal in its general lines, varies according to the musician who plays it.
Have fun and happy Carnival everyone!

• 1 kg of flour
• 6 eggs
• a couple of spoons of lard or 50 ml of olive oil
• a glass of white wine or half a glass of Chromel (aromatic liqueur produced in Pontelandolfo)
• Olive oil for frying
• local honey
• orange peel
• a pinch of salt
Method:
Pour the flour onto a pastry board. In the center, put the eggs, lard, wine (or liqueur), orange zest and a pinch of salt. Work until a homogeneous mixture is obtained. Roll out the dough to obtain a very thin sheet. Use a cake wheel and cut the dough into strips about 2 cm wide and about 25 cm long.
The strips thus obtained will be used to make the individual scorpellas. At intervals, join the edges of the strip with your fingers to make them stick, then rolling it on itself, joining the wider points until you create a kind of rose. Boil the oil and fry the Scorpelle with the notched strip down until golden brown.
Place on paper to absorb excess oil.
Before serving add the honey heated in a bain marie.